On a Lighter Note.. 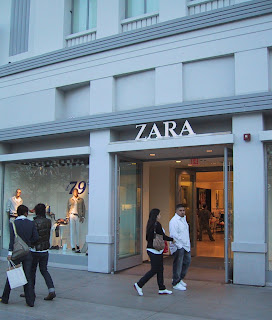 Globalization in Reverse! - Or just plain Globalization. For years and years I have been watching "stuff from the US arriving in Spain". There are the usual fast food joints and of course Starbucks. As far as clothes go I still don't think there is The Gap in Madrid.

Now We have Zara in L.A. on the 3rd Street Promendade in Santa Monica (Map). I do go in there from time to time but it is not the same as Zara in Madrid - even if they have the same stuff.

It seems that Globalization is open to everyone.
Posted by Carl at 8:02 AM No comments:

Tops on the list is maniac shootings. I really hate to say it, but that just re-affirms every bad stereotype they have about the U.S. - they love it. The guns, the society out of control, the violent idiot Americans. Of course, NO ONE loves that story more than the European media. You can be sure that all of it, in it's negative glory, will come out.

Here is a gem of a comment on www.20minutos.es :

"In the United States there are 4 intelligent guys teaching everyone, the rest are real shit. At least one of them enjoyed the masacre - and his name is Busch (sic)"

Now, I know that there were other comments that were positive - more or less. And I have to try not to be too sensitve, but it is difficult. Besides the stereotypes of ALL Americans being stupid, fat, violent - you know the drill - the one thing that blows every Spaniard's mind is guns.

I think what they don't understand is the historical / cultural aspect of the gun to Americans. We are a people that are taught to take care of ourselves. If you are out in the wilderness, the farm, the prairie, etc. you had to use the tools you had to take care of yourself, to hunt, etc. In many places of the country this is still true. Why? Another thing Spaniards don't understand. The U.S. is a BIG F-ing place. There are no Guardia Civil to help you most of the time, and another thing, we may need protection FROM the Guardia Civil.

Now, I understand that it is possible that this model no longer works in a modern society. Whackos exist who cannot handle the responsiblilty. In the old days, if one guy was a whacko and started shooting the next guy had a gun too - and that was the end of the whacko. Now this is not the case. We may not be able to have the guns around anymore - but that cultural change will take time.

In order to put it in context to the Spanish I sometimes bring up "La Fiesta Nacional" - the bullfight. I'm pretty sure most people in the world agree that this is a pretty screwed up party. But it is a cultural part of the Spanish life - I accept it as uniquely Spanish and I of course don't bother them about it. But if the bullfight were an American pastime - I think I know what the world would say about those violent, murdering, Americans torturing innocent animals. How could they do that! Like the gun in America, in time there probably will be no more bullfight.

Which brings me to the last big theme of this post. The Europeans and the Spanish have an almost pathological need to feel different than Americans. Many times this means better, more educated, more politically aware, etc. But here is the big secret - Western Europeans and Americans are EXACTLY the same! More on that later.
Posted by Carl at 7:47 AM No comments: 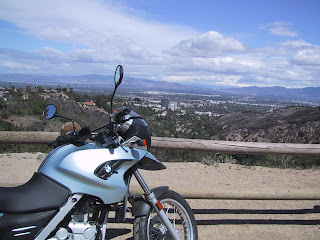 I went for a ride on Mulholland Drive today and saw some great scenery. Yep, that's L.A. (view to the valley - Map) I am not sure if everyone knows how beautiful it is (well to me at least). Of course, it is a very different town than Madrid and you better have transportation - but that is really a lot of the fun.

In Madrid, I love to not have a car / bike. Walking, the metro, is fine with me. Those methods of transportation are part of the city. And in L.A., driving is part of the city.
Posted by Carl at 5:11 PM No comments:

You know, I watched Almodovar's "Mala Educacion" - sorry about the accents - the other night and I'm just not into it. There is not one Spanish woman in it! The older movies of Almodovar at least had Victoria Abril looking pretty damned hot. Now it's just guys, boys, transvestites - you get the picture, and oh yeahh, pedophile priests.

If you want to see a great movie about Spain in the Eighties - see Barcelona by Whit Stillman. You have to watch it a couple of times to catch everything. Not that the two movies have anything in common. It's just that - Almodovar is way out there. I used to see him walking around the Centro - and by god I tried to like his movies, I really did.
Posted by Carl at 8:35 PM 1 comment:

From the "If This Were About Americans" department ...

I saw this article in the English version of "El Pais" but I only found the link to another source. It's about how 10% of Spanish people know someone who has gone abroad to have sex with MINORS. Presumably they don't feel bad about it if they are telling their friends.

Can you imagine what they would say in Spain / Europe if this article was about Americans going abroad to take advantage of poor, foreign, brown children? Of course, since it wasn't about Americans the story died.