Baltasar Garzon, the most famous Spanish judge (which I think is more like a special prosecutor in the U.S.) has decided to go after the Yanquis for crimes allegedly committed at Guantanamo. He says there are six Americans from the attorney general on down who put together the whole legal basis for Guantanamo / possible torture. Why he isn't going after Bush, Cheney, Rumsfeld - I don't know. Perhaps those fish are too big for him.

I wonder how Baltasar chooses which crimes to prosecute? Haven't heard anything about genocide in Darfur for example, or an arrest warrant for Osama Bin Laden.

I can imagine what would happen if we started looking into a few issues in Spain, there would be some very loud yelling going on if we did. Let’s see, we could investigate atrocities committed on both sides in the Spanish civil war, or perhaps Felipe Gonzalez’s alleged involvement in some nasty assassinations of Basques in the GAL incident. Actually, I personally would like to look into the wonton destruction of the Spanish coastline by real estate speculators with help from corrupt government officials – I think that is a crime against the international community.

I guess Garzon has nothing left to do in Spain. All is well and in order. It also seems he is not interested in anything else that could be going on over on that particular island. Fidel Castro’s jails must be real nice with everyone drinking rum and dancing salsa.

Update: It doesn't look like they are going to pick that fight. Garzon's Boss says no.

Update#2: Now Obama says he's open to the idea of prosecuting - Ouch!
Posted by Carl at 7:43 AM No comments: 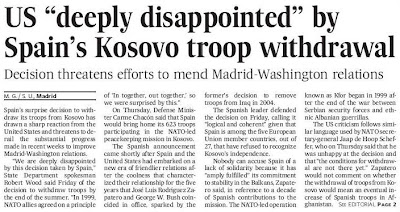 Nice unilateral decision! I wonder where I've heard that complaint many, many times before?

Carme Chacon, Spain's current defense minister and former housing minister, made a quick phone call to NATO to say she is bailing on Kosovo (leaving) - then announced it publicly right afterward. Apparently this is not the way these things are done in NATO so everyone else is annoyed - even Barack Obama, and he doesn't annoy easily. This move could threaten Zapatero's invitations to the White House - or at least make them "uncomfortable".

Spain is not crazy about Kosovo's indepence goals, since they really are not crazy about some of their own region's independence goals. This seems to be the main reason they want out. However I am unclear on why Spain can not disagree with Kosovo becoming an independent state but still fulfill their obligations to NATO?

I also read in another account that Carme uttered that infamous phrase "Mission Accomplished" to her troops. Others seem to disagree with her since everyone else's troops have to stay. I guess Spain has a different interpretation of the "In Together - Out Together" philosophy that started the mission.

One side note, for some reason it annoys me that newspaper articles like this one (and not only El Pais) never remind the readers that the "ethnic Albanians" in Kosovo are Muslims, and it was the U.S. who intervened on their behalf. It was the U.S. and NATO who forced the Christian Serbians to stop the ethnic cleansing of Muslims (by bombing the crap out of them), and all this without a U.N. security council resolution. I don't know why that annoys me...
Posted by Carl at 8:05 AM 1 comment:

Is He Still a Canadian? 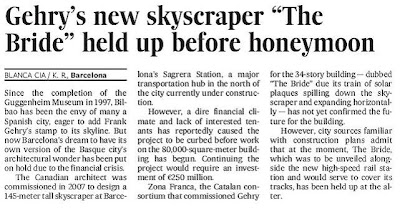 I know it's an old gambit, "Don't say you're an American, just say you're Canadian and avoid the hassle while you are in Europe", etc., But do the Spanish do it to us also? Not wanting to mention if we are Americans?

In this El Pais article they describe Architect Frank Gehry, designer of Bilbao's Guggenheim, as the "Canadian Architect". I guess that is technically correct since he was born in Canada, but he has lived and practiced in Los Angeles since 1947.

You would think that 62 years in the United States would at least get a mention.
Posted by Carl at 7:01 AM 2 comments:

The first time I had to start thinking about which of two countries to live in was at the end of my “student year abroad” in Madrid. That year was a mind-blower for a twenty year old guy from the suburbs of Los Angeles. I communicated in a different language, made new life-long Spanish friends, explored and enjoyed an exotic city, suffered a lot with homesickness for family and L.A., experienced the frustrations of living in Spain, and as cliched as it sounds, was forever changed.

Then of course there was the Spanish girlfriend. Spain was a different place then, emerging from the Franco era (1983). My girlfriend came from the modest neighborhood of Carabanchel and was an exotic gypsy-looking Madrilena. She thought I was pretty exotic too and she wouldn't have minded taking off to the U.S. with me. But at the end of the year I had to go back to California and continue with three more years of school. So the long-distance relationship began ... and we all know how those end up.

But before the end, we went through countless, "How could this possibly work?" scenarios - or at least I did.

Scenario #1:
"Spanish girl comes to Los Angeles to live. She has to learn to speak English, drive a car, try to go to a university, and be away from everything, and everyone, she knows. American guy has to completely take care of her."

Scenario #2:
"American guy goes to Spain to live. He has to find a job (yeah right! In 1980's Spain?). He has to get a lot better at speaking Spanish, get professional licenses in a foreign country in his chosen profession, and be away from everything, and everyone, he knows. Spanish girl probably will have to completely take care of him."

I decided long ago that living in Spain permanently would not work for me. I could not make a living there, and along with being in poverty, I would never really fit in. And even when I did try to live in Spain for six months at a time or so, I felt like life was passing me by in the states. So I had to go to "Plan B", which was live in Los Angeles and make a living like a regular American, then visit Madrid as much as possible and just get over it already.

It seems to me that to be a proper immigrant you must have no other choice or be absolutely convinced that you love it. You've got to want to stay.... forever.... in your new country, and be happy about it. And if you're involved in a cross-continent relationship, one person has to give up his/her home country - and like it. Otherwise you're just a visitor - like me.

All that preamble just brings me to Bluestreak Blog, an American living in Spain with her Spanish husband. She struggles a lot with these kinds of issues. She also writes about "living in Spain topics" in general and is pretty funny, and cusses a lot too, so that's a plus.

Piecing Together My Habitus

Dude, Do You Not Realize You're all up in Ma Face?

Expat Purgatory
Posted by Carl at 8:19 AM 4 comments:

They're Not Feeling it 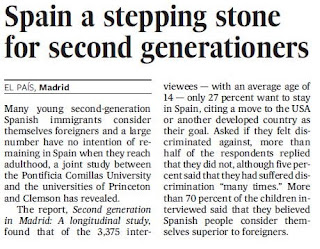 This doesn't sound good. More than 70% of second generation immigrants to Spain don't feel Spanish and would rather leave to another country - probably the U.S. - according to this El Pais article.

I have noticed how the Spanish word "inmigrante" sometimes seems to have a nasty connotation or feeling attached to it when it is such a normal word. Whenever anyone is talking about the immigrants it usually is in a sentence like, "Be careful down in Lavapies, there are a lot of inmigrantes there." etc.

The problem with Spain is everyone has just looked alike for too damn long. You can immediately tell if someone is "not Spanish". If you are Asian, then you are "un Chino", and it doesn't matter which country you are from.... and you definitely are not Spanish.

I guess it will just take time for them to get used to the idea that being Spanish has nothing to do with how you look. I wonder, can they get used to that idea?
Posted by Carl at 6:47 AM 3 comments: