On the front page of El Pais' English language Herald we have this story headline. Sounds like another boring budget article:

Sounds like that whole "living in poverty" thing should be the lead of the story - but then El Pais would be reporting bad news about the current situation and government handling of it - can't have that can we?
Posted by Carl at 7:18 AM No comments:

What's becoming obvious about the European Union is - they really are in control. All the bans and rules and regulations are coming, and will come from them and Spain really just has to say, "Yes sir"! Even if there is a so-called vote on EU rules, if the EU does not like the outcome they will just have another election until it turns out like they want. 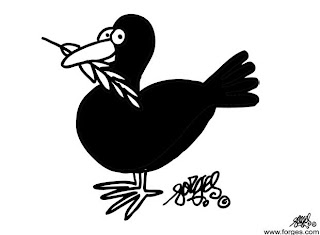 Ok. I'm as surprised as anyone that Barack Obama received the Nobel Peace Prize after only a few months on the job. Man, Europe really, really, hated George Bush. Just having a new guy in there is getting them way excited - even if he hasn't done anything yet. Excited enough to give him the Nobel Peace Prize for ... not being Bush.

But what is going on with this Black Dove cartoon in El Pais by Forges? Or maybe it's a crow? Is it absolutely necessary to continue to obsess on this president's "Blackness"?

They really do not have a clue on how to deal with - or start ignoring - race do they?
Posted by Carl at 6:38 AM 3 comments: