C'mon El Roto, Is It Really the Same Thing? 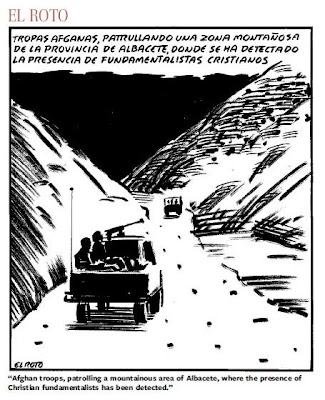 Well, El Roto, if there ever are Christian fundamentalists in the hills of Albacete who are chopping the heads off of non-Christians, blowing up girls' schools or killing girls who go to school, burying women accused of adultery up to their necks then stoning them to death, and just generally imposing their will on anyone and everyone - or you are dead .... and the Spanish authorities would not, or could not, do anything about it ... Then I would be OK with some Afghan troops coming to Spain to help us out.

I Absolutely would.
Posted by Carl at 7:07 AM 2 comments: 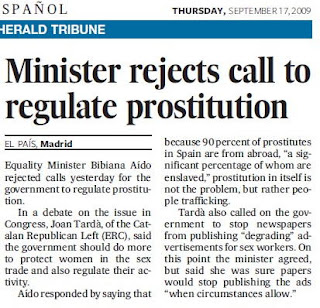 Some brilliant logic from "Equality Minister" Bibiana Aido here. She says that since 90 percent of Spain's prostitutes are from abroad and a lot of them are even slaves - the problem is not that prostitution is essentially legal in Spain (thereby creating a market) no, the problem is that there are evil people who come to take advantage of this market (the pimps).

Hmm let's see, if the market didn't exist would the pimps be enslaving woman? Forcing them to have sex for money? Can you believe they are even discussing the fact that there are slaves in modern day Spain without batting an eye?

I really don't understand this misplaced "freedom" Spain gives women in regards to prostitution. I guess it has something to do with a woman being able to do what she wants with her body - if she wants to hook, fine. The problem is.... men then turn them into slaves - nice freedom!

How does Spain combat this problem? By outlawing prostitution? No, they try to tell low-life scumbags (the male customers) to ... "Please don't exploit women, it's not nice, please don't bang hookers in the street..."

How's that working out? Not very well. Check out this article and photos in El Pais...
Posted by Carl at 7:12 AM 5 comments: 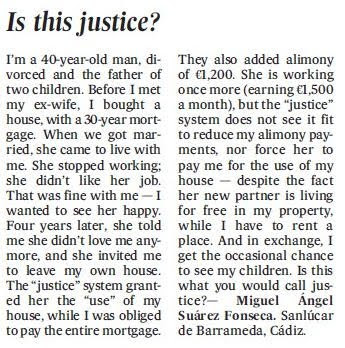 Of course there are always two sides to every story but ... poor bastard. Maybe he is a wife beating son of a bitch, and I know there are children involved, but since I'm a man I'm thinking he is a poor bastard.

California used to be the center of the "woman takes your stuff" universe. But I have heard many stories like this one in Spain. I think Spain now tops California. In Spain it seems if there are children involved, the house and the kids go to the woman no matter what - and the man pays.

There must be some middle ground where both sides are able to have a life.
Posted by Carl at 8:18 PM 5 comments: 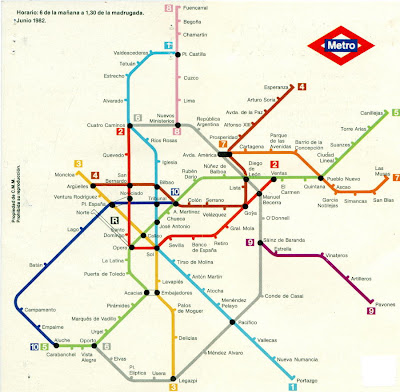 Take a look at that map. It's a beautiful and simple thing. This is the Madrid Metro as it existed in 1982. Looking at this map, it seems like maybe you could actually visit a good number of the stops - it's just not that complicated. This is how I saw the Madrid Metro when I first came to Spain.

Is it me or does the current Metro Map give you a headache? 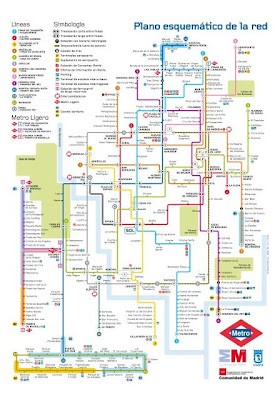 Sure, you can go to a lot of places but it's a mess graphically. It also has nothing to do with the actual location of the stops in relation to each other. They need to make a simple "Centro only" metro map - something that can fit on a T-shirt.

Hey, notice how on the 1982 Metro map the stop for "Gran Via" on Line 1 was named "Jose Antonio" (an infamous Fascist). They changed it sometime in the late 80's? Perhaps the very first move for the future Historical Memory Law.

Alright, I will not cling to the past. Change is good, right? But it was a good looking map.
Posted by Carl at 7:25 AM 2 comments: