Everyone's Equal in Cuba - Unless You're Black 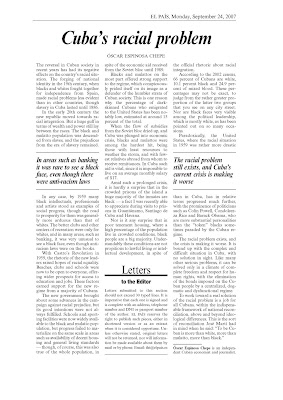 Wow, they must have been napping at El Pais. They let a negative op-ed piece on Cuba get through the idealogical gauntlet. This editorial written by a real live Cubano says that Black and Mulatto Cubans are doing poorly, racism is alive and well there. In contrast, the U.S. has Blacks in real positions of power.... I'll say, just ask Oprah Winfrey. She made 260 Million dollars last year, top of the television heap.

I know this is not what most Europeans would think is the case. How could the evil Capitalist empire be doing better with racial problems than the people's Cuba? Because Latinos are just as elitist as anyone, maybe more so, and the so-called egalitarian political system does not seem to be so equal.

Good thing Zapatero is supporting them with Spanish tax dollars. He knows how to back a winning horse.
Posted by Carl at 7:41 AM No comments: 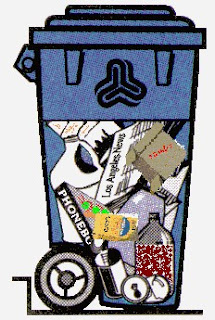 It is common knowledge that Spain is much more “green” than the U.S. They recycle more, use less gas, grow organic food, etc. and we do nothing but waste... Really?

Katie over at Espana Profunda had to answer to a commenter of hers after she had the gall to mention something positive about the U.S. She said, gasp, that we are doing a lot to be “green” in the states. There are more Toyota Prius hybrids here than anywhere, recycling is commonplace, organic food is easily found and very mainstream, farmers markets are in many local neighborhoods, energy legislation makes us build more efficient buildings, and makes cars pollute less. In fact, the only reason the whole world now builds cleaner cars is because California made Detroit then Japan then Europe - build them.

That picture above is a blue recycle bin. Every house in Los Angeles has one, along with a green one for garden clippings and a black one for trash. The blue bin takes any type of recyclables, cans, paper, plastic, cardboard, plastic bags, even styrofoam now, all together. No need to separate – they do it. So, as suspected, the trash bin is emptier with each passing year.

This is not what is comfortable to contemplate in Europe though. Everyone knows that the U.S. is the evil waster of all energy. Europeans don’t have refrigerators, don’t drive cars, don’t have trash, don’t burn heating oil, don’t have golf courses, don't drive diesels, and don’t have air conditioners. Yeah right.

Spain also has a long way to go in many "green" categories. Organic food is a joke. It's too expensive and delegated only to a few hippie vegetarian establishments that alienate ordinary meat-loving Madrilenos. Recycling is difficult – it’s much easier to throw everything away. Developers in Madrid are building more and more suburbs obligating the work force to drive farther to work (many times alone) from bigger and bigger “chalets”. Sounds like another place I’m familiar with …

I know it is true that modern society and its conveniences were, by and large created (or mass produced) by Americans, and those conveniences caused a lot of unforeseen problems in terms of energy use and pollution. But, and I’m just guessing here based on observations, I’m pretty sure Americans will also be helping on a lot of the next solutions.

Just be prepared though, because just like with everything, these future answers will probably breed yet another bunch of unforeseen circumstances.

I have to tell you that I kind of secretly enjoy hearing the Spanish talk crap about the British. You know, the typical stuff … that they are drunk, don’t want to learn Spanish, live in isolated expat enclaves, cook rotten food, etc., the whole nine yards.

Why? It’s not because I don’t like the Brits, I actually do. I think most Americans generally have a good opinion of the British. We feel that they are our sophisticated distant cousins or something. Of course they don’t feel the same way about us. To them, we are the rich and crass relatives they love to hate.

I like hearing the Spanish verbally bash Brits because that means they are concentrating on someone other than the Americans. I also have the chance to join in on the fun and be part of an "us vs. them" mentality for a short while, “Yeahh, the food is terrible! And how about those football thugs!” etc… But I don't really believe it.

Conversely, there are those Spanish people who are real Anglophiles, especially in regards to English pronunciation. Any word that is not spoken “British” is just plain wrong. They wouldn’t be caught dead saying "schedule" like “sked-jewel”, no, it has to be ”shed-jul”. To them, American pronunciation is the pinnacle of low-brow tastes and attitudes. I think that’s fine if that's what they want. I understand both languages, British and American, and couldn’t care less. There is one thing I am not too crazy about though … that's when the British try to correct MY English.

This has happened to me on several occasions in England and on British Airways. One time, I asked in perfectly acceptable American-Californian English, for some water. I said “Wah-der”. The lady responded, “You mean some Wah-ta?” Another time I asked for the bathroom and the Brit said, “ You mean the TOILET?” … Well, I was just going to wash my hands but if there is a toilet in there that’s okay too …

Politics. It’s amazing how much it defines everything, now more than ever. It really seems to all boil down to “Left versus Right”, everything is reduced to this. I know that being American (and not being ashamed of it) is very unpopular in Europe. Why? Well, that’s complicated, and I will try to go into that sometime, but one reason is that Europeans assume Americans are “right -leaning” politically, and Europeans of course are not. “Right-leaning” is very unpopular (although I’m not sure they really understand why this is other than some vague “fight the man” feeling). “Pro-American” is also not PC, and uncool.

What is funny is that when I first came to Spain in 1982, I was a very left-leaning individual. I used to have many a discussion during the Reagan years of how I agreed with everything all the Spanish people said about our militaristic and simpleton actor/leader. Back then, my sister was even a bona fide member of the American Communist party (I always got big points for that).

But over the years I changed - due directly to spending time in Spain. I heard so much bullshit about the Jews in control of everything, about how even World War II was a selfish act on our part (my father and his three bothers served), about NATO being a huge war-mongering institution (until even Felipe Gonzalez joined up), about the U.S. being behind anything and everything bad in the world, about the U.S. being cowards for waging an air-battle with no ground forces in Bosnia to stop a war against Muslims, then for being too aggressive in Afghanistan and Iraq with troops on the ground, etc. There was a lot more crap, too much to mention.

Another thing that strikes me odd is that to my friends who are politically conservative, I am considered a Commie-Pinko. But to my friends and family who are very left-leaning, they would swear that I am a Bush-voting Republican (I’m a registered Democrat by the way). The sad truth is I have never voted for a presidential candidate who actually won. Since, 1980 I have consistently cast a losing vote. Nice record!

So my political sentiments are in flux - depending on what country I am in. I know that I will not apologize anymore for being an American, Fuck ‘em! I know that my opinions on the other Spain related blogs I enjoy are viewed as suspect, as “outside the normal anti-U.S. viewpoint”. But I think I’ve earned my worldview. I have been the American in Spain since 1982! I have heard the same B.S. spewed over and over and I guess it has turned me into a conservative - when I am in Madrid! But in the states, in my natural habitat, I'm still half a Pinko. 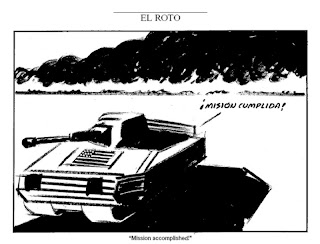 Alright. That title is not too clever. But how much thought did this cartoon take? I think he pulled this one out of the archives (or somewhere else?). Let's see .... A tank with an American flag, a bunch of smoke and a "Mission Accomplished" caption. That works. Get me to the bar. I'm done for the day!

I don't always understand El Roto from El Pais. First off, his drawings are spooky. The people he features look like they are out of some bad horror movie - like demons or something. And of course I am handicapped when it comes to "humor" in Spanish. If I'm at the Comedy Store on Sunset Blvd, I know everything they are talking about. But in Spanish I'm screwed. I have to work HARD to figure out the joke.

Of course El Roto's "jokes" are political in nature and are a different story. And what fun it is to simplify everything from the sidelines. It is all so easy from the safety of never having to (or wanting to) make any decisions that matter! Hey, THEY fucked it up again! Good thing I am drawing these cartoons to point it out.
Posted by Carl at 8:35 PM No comments:

Wow! This is going to be tough for Spain. I know all the major events went down in Portugal and the couple are British, but people in Spain really got into this missing (very cute) child thing. As usual, I'm sure other children go missing every year in Spain with no mention, but this one was a big deal. I even received e-mails from Spanish people asking me to forward descriptions of the child to everyone I knew in Los Angeles, just in case she was here!

The first rule in foul play - look at the closest people. The Madeleine McCann disappearance is very sad, whatever happened. The people in Spain - very sweetly I will add - assumed external foul play, some evil nasty bastard and not her mother or father, was responsible. That is nice but unfortunately naive now days, in the U.S. or in Europe.
Posted by Carl at 8:11 PM No comments: