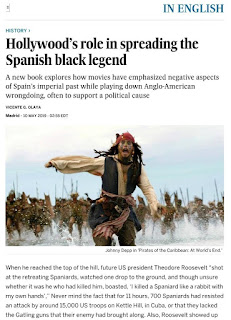 This article in El Pais – English version is very silly in many ways… A Spanish Colonel and historian, Esteban Vicente Boisseau says that the mysterious entity called “Hollywood”, is making a concerted effort to smear Spain and Spanish people by perpetuating the so-called leyenda negra.  The leyenda negra was the bad press Spain received in the 16th century and later when they were top dogs in the world. When you're on top, everyone wants to shoot you down.

First off, really Colonel ? Are we six years old?  Who cares what Hollywood thinks or says?

Second, I am really sorry to have to report this to you, but “Hollywood” (whoever they are) does not think about Spain one way or another very much. The only thing Hollywood thinks about is making money. If Spain crops up every once in awhile to be used in movies - then fine.

Third, I also have to report to you that movies aren’t real, they are not an historical record and I think most everybody knows it. I am not sure why you would be taking silly movies so seriously but you should probably knock it off.

This military guy, Boisseau, also seems to hold particular hostility toward Theodore Roosevelt. I guess he is still pissed about the Spanish American war. He is very concerned that Roosevelt was portrayed positively in that serious cinematic vehicle “Night at the Museum”. Well, I don’t know about you, but I get all my historical facts from Ben Stiller movies.
Posted by Carl at 12:46 PM No comments: