... For El Roto to get negative that is.

Funny thing is .... I think I agree with him. There is a lot of drinking of the Obama kool-aid going on with very extreme expectations for his presidency. But I'm not so sure there will be a huge sea-change in actual policies. Of course there will be the usual Democratic party-line changes, taxes, social programs, environment, and everyone wants to end the war, etc. But on other foreign policy fronts, Obama will just be able to explain in a nicer way why he is going to do what he wants to do anyway. Bush just did what he wanted without bothering to explain to, or consult with, the rest of the world - knowing he's going to do it anyway (whatever "it" may be). So I guess he thought why bother? And his presentation skills were, shall we say, lacking. But you gotta at least act like you are listening ....

Obama does have some good presentation skills. Maybe that is enough of a change?
Posted by Carl at 8:36 AM 3 comments:

I'm sure everyone in Spain has now read that California has "Banned Gay Marriage". Sounds pretty bad huh? Sounds like the backward and provincial Americans really haven't changed much - even with the election of Barack Obama.

Some background for Spain. In California there are ballot measures that can make laws. The people vote on what they want - democracy remember? So, in 2000 there was a ballot initiative which stated that the definition of marriage was the "union of one man and one woman." This measure was passed by the voters to the great chagrin of the pro-gay rights people who proceeded to sue. Then in May of 2008, the California Supreme Court decided to overturn that voter made law. The judges said the definition of marriage is just the union of two people - no matter the sex - and no matter what the voters said.

This upset some Californians who asked themselves, "Didn't we just vote on this? Why are they changing our decision?" The only way to stop the judges from doing this again was to amend the California Constitution to define the word "marriage" again to the "union of one man and one woman."

Now, in California we still have a legal "Domestic Partnership". This provides, I believe, all of the same legal protections of marriage - without calling it "marriage".

So, I think two things upset the voters. The first was they did not like the judges changing the definition of "marriage" after it was voted on - essentially overruling the will of the people. The next is yes, I believe there are many Californians uncomfortable with the whole concept of same-sex "marriage", especially old-world newcomers. Remember, California is full of immigrants, traditional people from Mexico, Asia, well .... everywhere.

If the pro-gay rights people had just concentrated on making sure that "Civil Unions" meant that gay couples have all the same rights as traditional heterosexual married couples, then I don't think they would have had a problem. Then they could fight the "marriage" battle later. Remember, Barack Obama's own position is that he is against "Gay Marriage" but for "Civil Unions."

In Spain the people did not have a chance to vote on this matter. The parliament decided it for them. I wonder if they had voted on it, and they had a choice between "gay marriage" and "civil union" would it have been a similar result to California's? This article from El Pais says no. But people are pretty similar everywhere. Traditional views of very old institutions, like marriage, change slowly.
Posted by Carl at 6:39 AM 10 comments:

Back to the Important Stuff - Piso Work Update 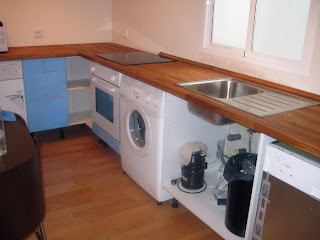 Now that I've handled that little election thing it's time to get back to the more important stuff - What the "F" is going on with the Piso project? 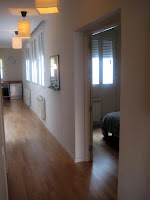 Well, I was in Madrid in June / July and swore I was just going to hang out, relax, visit friends, eat menu del dia, drink wine, read El Pais and get pissed off, etc. and not work on the goddamned piso. But I couldn't take it. I decided to start on the cabinets in the kitchen. So, I made the long train trek to the dreaded IKEA, stressed out there, spent too many Euros, fought with the IKEA girls in the kitchen department, got a million boxes back to the house somehow, and got to work.

I tackled the hardest part of the job, the lower cabinets. This included new oven and cooktop, new sink, new dishwasher (gotta have wasteful American-style conveniences - including my garbage disposal I brought from the States), positioning washing machine and clothes dryer - yes a dryer, and a new very heavy solid oak countertop. I got it all installed but not fully working - then I ran out of time and energy. 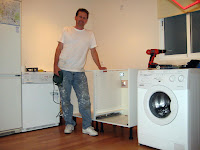 Doing "obras" in a piso is a huge pain in the ass. You are working inside the house. If you cut a piece of wood the dust goes everywhere, if you have to get rid of some trash or old cabinets, it's five flights of stairs down to try to find a place to get rid of it. It's constant dust, dirt, and mess. Not to mention just getting the construction materials to the piso... there is no car, no elevator, no parking, en fin, it's rough.

I am not finished of course. I'll be back in early December to continue with the torture - but you know I love it.
Posted by Carl at 6:37 PM 3 comments:

I'm very proud to say that I continue to be in control of the U.S. Presidential elections.

Yes, I did it. I voted for John McCain. Why? Very simple. My state, California, is a blue state. It always sends it's electoral votes to the Democratic candidate. My vote for John McCain could in no way actually help him. Likewise, my vote for Barack Obama would not really help him either since he already won California before the election even began. So I very logically decided that the only value my vote had was in it's "Jinx" value. I couldn't risk it and actually vote for the candidate I wanted. My strategy paid off handsomely and my candidate lost - exactly as planned.

Truly, only in America. A self made, not rich, first generation immigrant (on his father's side), and a black American, is the president. Everyone was happy and excited it seems. Even on Fox News Channel, Carl Rove... CARL ROVE - Bush's guy! Was saying what an amazing moment this was, how historic, and how Obama simply kicked McCain's ass and we must support the new president and pray for him. John McCain was extremely gracious in his concession speech offering all his help and support for Obama. And of course, Obama's acceptance speech was good - but speaking seems to be so easy for him...

I definitely was touched again by our concept of the "loyal opposition". Even though the campaign was nasty at times, after it's over everyone says, "Well, he won so that's that. He's the President - and we will support him." It's a nice honeymoon period for at least a short while....

How long will the honeymoon period last in Europe?
Posted by Carl at 4:49 AM 4 comments: 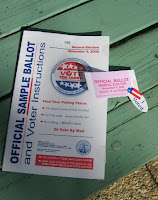 There was a lot of people in the middle of the day at my local polling place. Not like a huge line, but more than usual. There also seemed to be more poll worker volunteers. Voters were making sure that the ballot was correctly placed in the holder before inking, asking the volunteers to assist them, people were really into it. 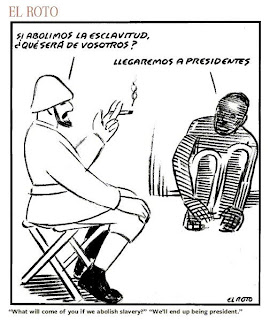 I can't quite figure out if this is a positive cartoon or not. I look at it and I'm not crazy about the cowering black man in the corner with the big nasty white dude in front. I guess the sentiment is positive - that a black man can become president of the United States. But I can't help thinking that it is also one last jab. The Spanish and Europeans love to remember slavery like it was yesterday. Everyone knows that only the Americans ever participated in this horrible pastime.... Right?

When I think about an Obama presidency the last thing that comes to my mind is slavery. Maybe that's because Obama's father came from Kenya in the 1960's - a little late to be a slave. And another reason - I feel like that slavery thing is kind of behind us now. Of course it is our history, it shaped us, we've struggled, it's been very rough at times. But the point is we're moving forward.