I know it will never happen. There is no way Zapatero has the cashews, but he should pull a Reagan and fire all the air traffic controllers. They should be thankful they have a job.

For anyone who is not, shall we say .... OK, as old as me, in 1981 the air traffic controllers in the US tried to pull this same stunt. Reagan gave them 48 hours to return to work and when they didn't he fired 11,000 striking controllers. They hired new people, they used the military to fill in, etc. and it all worked out.... except for the guys who got fired.
Posted by Carl at 5:06 PM 1 comment:

El Roto Thinks the Same as Me? 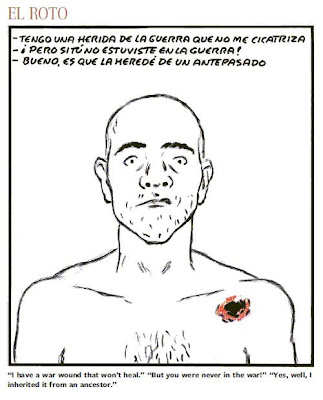 I don't see any good coming from Spain's Historical Memory Law, the one that literally looks for the buried bodies from the past. A lot of nasty shit went down during the civil war - on both sides. Now that PSOE is in power, they are looking for all the nasty stuff that Franco did. As soon as PP gets back in there, will they start looking for the nasty stuff the communists did on behalf of the Republic?

If I am reading El Roto correctly, and that usually is not an easy task, it seems he also doesn't think the wounds from the war last through the generations.

Maybe it's time to, if not forgive or forget, time to move on and solve some present problems?
Posted by Carl at 7:39 AM 5 comments:

It seems like such a simple thing to do. Let's say I'm a Spanish advertising executive and I have a great idea building on Obama's famous campaign slogan, "Yes We Can", and oh yeah, I really don't speak English - I just think I do. Why wouldn't I run my idea past a couple of native speakers? In fact, why aren't there native speakers on staff of my advertising firm if I am selling English language ads?

We all know that this used to happen all the time in Spain, the English on commercials, bill boards, t-shirts, etc. just isn't quite right, but in 2010, on a big ad campaign, this still happens?

What's funny about this story is the supposed English language expert from the Complutense University tries to correct the awkward "Yes We Want!" slogan and she still gets it wrong...

They could have found any American student on the street or Brit in a pub, to tell them that the correct response to, "We want to learn another language!" is... "YES WE DO!"
Posted by Carl at 8:12 AM 5 comments: 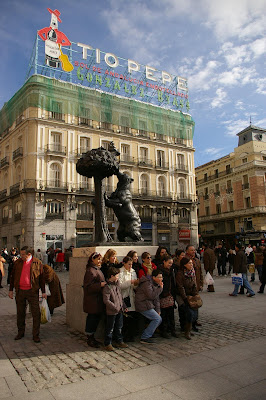