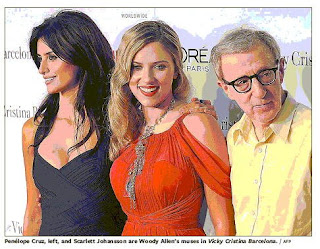 It’s a tough contrast to see Woody next to those two. I considered cutting him out of the picture but news is news. Just hold your hand over Woody’s face so you can enjoy the view.

Allen’s latest movie premiered in L.A. this week. As you remember, Woody got paid from the guys in charge in Barcelona / The Generalitat, to make the movie. You would assume Allen has a special place in his heart for Barcelona or something, but it turns out that Woody would have gone to any ol’ city to film – just as long as they picked up the tab:

Quote Allen, “People from Barcelona called and said if I was interested in making a film there, they would finance it, so I said, ‘sure’,” he admitted at Cannes. “If someone had called me from Rome or Venice or Stockholm or god knows where, I probably would have agreed to it just as readily.”

Nice Woody! You should at least lie a little and say that Barcelona is the greatest place in the world and you would’ve spent even your own money to film there.

What’s funny about this (not funny, ha, ha, but funny ironic) is that on the same day, in the same newspaper (El Pais), the front page headline is the following:

It seems that the down-turn in the economy could effect education and even healthcare. Of course they are blaming Madrid for taking their money but what about bone-head moves like this one?

I wonder if Woody shares any of the money the movie makes with Barcelona. If he does, I’m sure the “usual” Hollywood accounting practices will be in place, i.e., even if it makes a ton of money (which it won’t) – Barcelona will be told it was all spent in distribution, sorry!

Does Anyone Else Think This is Nuts? 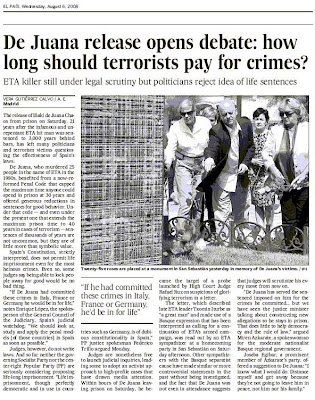 Well, he only killed twenty five people, it's not like it was a really awful crime. He also was a nice guy in prison, working in the laundry and so on, so that really counts. And he did do 14 months for each of his victims (21 years for 25 murders). So, what more do you want?

Seriously, what the hell is Spain thinking? Is this some kind of joke? Symbolic prison sentences of 3000 years, time off for "good behavior" in murder cases, child rapists let out after a ridiculously short sentence - or doing no time at all! I know we Yanquis are brutal barbarians with the death penalty and all (not in all states), but I'm sorry, this guy should not walk out of prison ever, neither should child killers. Pedophiles can not be "reformed" and guys who kill 25 people revoke their right to live in society with the rest of us, even if they convert into Mother Teresa in jail.
Posted by Carl at 8:07 AM 4 comments: