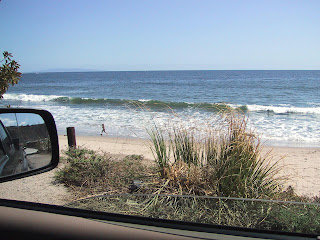 When I drive to work from the San Fernando Valley to West Los Angeles, this is what I see along the Pacific Coast Highway. Not bad huh? There are no tall hotels on the beach blocking the view, no huge banks of pisos waiting for British tourists. Yes, there are houses on the beach, but it is a HUGE fight to get one built. The reason for this is The California Coastal Act. Passed in 1976, it sets rules for development along 1,100 miles of coastline.

On my long list of things that have happened in California long ago and that will happen in Spain - is this kind of legislation. If they don't they are crazy. I really don't understand how developers got away with such murder in Spain. BILLIONS of Euros in bribes given to government officials in order to build crap - and lots of it. 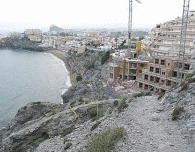 This reminds me of a joke told to me in Madrid by my friend Fernando. I will butcher it here for you now:

A Spanish public works official goes to Germany to see his counterpart and exchange ideas. The German official, pointing at a highway, says to the Spaniard, " Hey, see that eight-lane super highway over there? The German gestures to his shirt pocket, "10% for me - oh yeah". Suitably impressed, the Spaniard goes home. One year later, the German visits Spain. The Spanish public works official says to the German as he points to an empty field, "Hey, see that eight-lane super highway over there"? Confused, the German says, "No". The Spaniard points to his shirt pocket smiling broadly.
Posted by Carl at 9:25 PM No comments:

Is this the future of language in Madrid? In L.A., some radio and TV stations, and many private conversations in the street, go like this: see link LATV . There is Spanglish (the mixture of an English word and some sort of Spanish - like "lunche") and then there is just both languages spoken together, i.e. truly Bi-Lingual. Usually the conversation starts in English then switches back and forth between English and Spanish as it suits the speaker.

It might go like this, "Let's go to the mall para comprar algo". I have done this in Madrid with Spanish friends who speak English - when I get lazy. I don't really do it in L.A. but I enjoy listening to these conversations. It is a very real indicator of how the cultures are mixing and how things are changing - in both L.A. and Madrid. Of course, it has been happening in L.A. a lot longer. In Madrid they are just really beginning to deal with big changes due to immigration.

Here is another link Latino 96.3 radio station in L.A. (click on the "listen live" button.) The music also is "Bi-Lingual" - not all the time, but a lot.

The big question for Spain is, what will the two main languages be? Spanish and English? Spanish and Arabic?
Posted by Carl at 8:04 AM No comments: 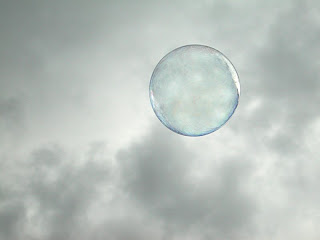 People are really excited in Madrid about the "Burbuja Inmobiliaria". First off, this term is of course borrowed straight from the English. We have had some experience with the "Real Estate Bubble" in Los Angeles - Hell, the term was probably invented here.

Check out this link to Idealista - 548 comments to this story! People are freaking! Some Spanish guy in charge of something, who of course can't really know what is going to happen, says that prices should be going down a lot more by now so that there will be a "soft landing" of the bubble. I wonder where he heard about the soft landing idea?

The last big run-up in Los Angeles real estate prices happened in about 1986 - 1989. People thought it would never go down. It was the same old story, building like crazy, houses worth more a week after you bought, etc. Nobody saw what was going to happen. Then, L.A. lost a bunch of jobs in Aerospace due to the end of the cold war. The market tanked, and houses did lose value, maybe 20% or so depending on where the house was. People who overextended themselves with loans, or who took money out of the homestead to go on vacation and buy cars (stupid), lost their houses - big surprise! This lasted until about 1995 - when prices started going up again and they kept on going.

Now house prices in L.A. are through the roof but holding, however with less sales - sound familiar? Everyone in L.A. and Madrid are wondering what will happen next, but they are much more agitated in Madrid. By the way, all the losses from the 1989 bubble in L.A. were completely erased and house values are much higher than before.

The Spanish also are grappling with another "new" phenomenon - the mortgage. Before, nobody hardly ever had mortgages Spain. People paid cash. They saved their money or got it from a relative. Mortgages were very rare and with nasty interest rates - like 17%, no kidding! The 30 year mortgage is something they have a hard time wrapping their minds around too. Being in debt for so long for a house! Que barbaridad! Of course in the US it has been common for YEARS.

Dear Madrilenos - I'm afraid the old days are gone. Your city is a capital of a major European nation. People want to live there and more are coming. It is very nice and tons of cash is being poured into it by the EU. There is great transportation, entertainment, people, jobs, plazas, you get the idea. Owning part of it is worth Euros - and I say lots of Euros. Will prices go down? Of course! They will go up and down. But piso prices will always march upwards over time barring some nasty disaster or war.

The bottom line is I don't really know what is going to happen. But I do know that if the bubble bursts you gotta hold on until piso values come back - I believe they will - I just don't know how long that will take.
Posted by Carl at 6:25 PM 2 comments: 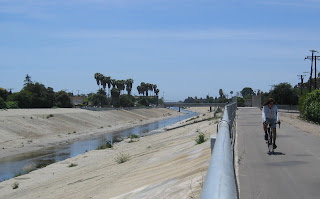 Remember when I said earlier that L.A. was beautiful? Well, like anyplace it depends on where you aim your camera.

In Madrid, there is a lot of complaining about the Rio Manzanares. It's too small, it's really just a creek, it's feo, and why are we spending so much money making it pedestrian?

I think the Madrilenos should meet the L.A. river. Here it is and there are no serious plans to make it look any better. Even if we did want to - it is so damn long it would cost a fortune. It is a purely utilitarian storm water collecting device , but it really was a river - when the Spanish were here.

It flows to Marina Del Rey where it does start looking a lot better. At least there are palm trees and sunshine - and a bike path.
Posted by Carl at 4:56 PM No comments: 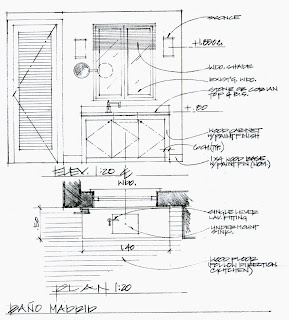 After I finished working my ass off on my Piso remodeling project, the Comunidad decided that they had to do their own remodeling. So, most of the work we did in the kitchen and the bathroom, had to get ripped out to fix rotten wood beams and columns.

This was a blessing actually because I was able to redesign the bathroom completely and "real" Spanish contractors were going to do the work - not me and my buddies that I brought in from L.A.

I had a crack designer friend of mine do a design to organize the bathroom (elevation shown) and I flew to Madrid to tell them what I wanted. There really was no way to organize this bathroom without doing something a little unconventional for L.A. standards (and completely "out-there" for Madrid standards) we had to put the sink right in front of the window. This blew our foreman, Ricardo's mind. He could not get over this. He told me several times that, "Esto no se hace"! This is just not done!.

After expressing his disdain and disgust for the crazy American design, he said he would do whatever I wanted, that it was not his problem if it was nuts!

One thing is certain in Madrid. I saw a lot of bathrooms while looking for pisos and they all look basically the same. A lot of flowery tile, a bidet with a mop stuck in it, and the ubiquitous "Roca" fixtures. Ok, to be fair, these were bathrooms probably never remodeled. Spanish design is hot now. Beautiful modern is in and they do it well. But it will take time for the rank and file Madrilenos to appreciate it. They like to do it their way - and that means the same old way.

My finished product does not look like the drawing exactly, but after it was completed, I asked Ricardo, the foreman, what he thought. His response? "Me ha gustado un poco".

Now that is something!
Posted by Carl at 7:31 PM 2 comments:

Part of the Club. 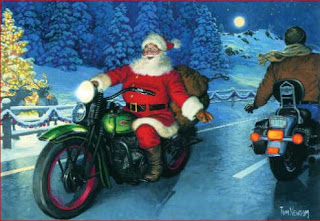 This is a silly picture but it is the only one I can find that explains the "Motorcycle wave". For you non-bikers out there, when two bikes cross paths on the lonely highway, the bikers (usually) give a very low key and "too cool for school" wave to each other. This is standard practice in L.A. on the twisting roads of the Santa Monica Mountains but I was very surprised (for some reason) when I encountered the same practice on the roads outside of Madrid.

Now, there is one thing that will always be the case no matter what I do in Spain - I will always be a foreigner. And, on top of that, I will always be an American....foreigner. I can't count how many times I have walked into a bar, the market, a store, whatever, and the Madrilenos take one look at me and say (to themselves) uh oh, where is this guy from and what does he speak? Is this going to be a pain in the ass? They are always guarded. I have to proceed to win them over - most of the time. They know I'm a foreigner, but from where? When they find out I'm an American it usually adds a whole new layer to the issue, "Hey, how about your amigo Booosh?".

Well, there was one place where I belonged to the Spanish club. When I was on the roads around Segovia and Avila, safely hidden in my helmet, passing Spanish bikers on the road - and I got the wave. No immediate sizing up my physical appearance or language ability, no checking out my clothes for clues, I was a Spanish biker, a member of the club.
Posted by Carl at 7:08 PM No comments: