How Long till the Spanish get Pissed?

I'm not sure I totally understand Spain's position on crime and punishment. I guess they feel that anyone can be rehabilitated. For this reason there is no such thing as life imprisonment. The maximum time anyone can get is something like 12 years, even if you kill 20 or 30 people, rape and kill a child, or get together with your buddies to murder your ex-girlfriend and dump her body in the Guadalquivir.

I know people in Spain have been told for many years that in the U.S. we are a bunch of barbarians for having such a thing as life imprisonment without the possibility of parole - let alone, in some states, the death penalty. But from this news story and others that have come up lately, it's looking like some changes are brewing in Spain. People are getting pissed that scumbags like this get such light sentences.
Posted by Carl at 7:29 AM 1 comment:

I Love L.A. (But Penelope Doesn't) 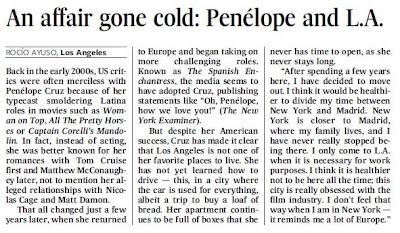 Penelope says L.A. is obsessed with the film industry and it is not "healthy" for her to stay here. Hey Penelope, maybe you should try hanging around with a few people NOT in the business. I mean every boyfriend since you were very young (I'm pretty sure) was an actor - current super-famous Spanish dude too. This is a pretty big town with an S-load of people not part of the "industry". I'm sure you could find a few non-actors.

Actually, probably not. The bottom line is that like any super famous person, the only true friends she has are the ones who knew her before she became a big star. And logically those people are in Madrid - and maybe in New York now. And dating a "civilian" probably would not work either. Who could put up with that kind of stress but another famous person? But don't blame L.A. for this.

And one more thing. LEARN TO DRIVE! Not knowing how to drive in L.A. is like not being able to walk in Madrid.
Posted by Carl at 9:00 AM 1 comment:

Darwin Dissed in his Own Hometown

Everytime I read the results of another survey taken by impartial persons (yeah right!) showing what a bunch of moronic yahoos Americans are because of their gun ownership, their illiteracy, and the fact that the "typical" American does not know where France is etc., I wonder, "Does anybody ever give these same impartial surveys to Europeans to find out what they (don't) know?"

I'm pretty sure the answer is "not usually". It's much more fun to think Americans are the only stupid ones.

Well, maybe that's changing. El Mundo published this article on the run up to Darwin's 200'th birthday showing that more than 50% of Brits don't accept Darwin's evolutionary theories - and he is their guy! Is intelligent design and "guided evolution" on the move in Europe?

The religion and creationist thing has been a favorite club for superior minded "Americans-are-idiots" types to hit us over the head with for years. Everyone knows no one in Europe could possibly think the same way as those American dolts - so let's not bother asking them.

I'm just saying that if we are idiots then I know that many people all over Europe are just as stupid on a whole range of subjects - if anybody asked them in the same "impartial and honest way" that they ask the Americans. That's right. I'm setting a real low bar for myself, I just want to be as stupid as the next guy!

I wonder what the results would be in Spain?
Posted by Carl at 9:00 AM 9 comments:

Bush was the Problem - Right? 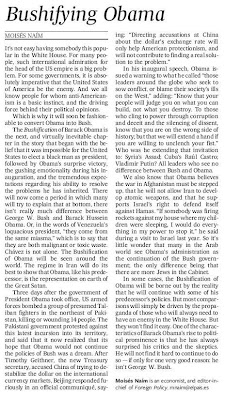 I’m not sure how I feel about this opinion piece in El Pais. On the one hand I think that many Europeans have a natural antipathy toward the U.S. (like the article says) and no matter what the Americans do - they won't like it. Having Bush in there just let all those feelings come rushing to the surface. A perfect poster boy for the evil empire. So it is logical that even with Obama as President many Europeans will try to hang the same "Bush-like" label on him. Hence the "Bushification" of Obama.

On the other hand if they don't "Bushify" Obama and they love what he is doing then they are a bunch of hypocrites. After all, Obama will continue many of the same policies as President Bush. He kept Bush's defense minister, he will increase troops in Afghanistan, he will continue CIA renditions in foreign countries, his support for Israel won't waiver, he is a Christian and will continue with Bush's "faith-based" community support programs, and he is against gay marriage, etc. Sure he is going to close Guantanamo (eventually) just like McCain was going to do, but seeing that Obama really will act like Bush in many ways (i.e., like an American president) isn’t it hypocritical of Europe NOT to treat him the same way, with the same hate and derision? Or was it all bullshit? I guess they only hated Bush for his silly grin.

I think the bottom line is they are pretty confused - Obama was a curve ball they just didn't see coming.

Update: Obama's position on the dismissal of a lawsuit brought by 3 men who say they were kidnapped by the CIA and tortured is "exactly the same" as the Bush white house's position. Obama says the suit should be dismissed because the act of trying it would threaten national security - just like Bush said. Will there be an outcry?
Posted by Carl at 8:00 AM 3 comments: